This blog post is my personal attempt at reconciling accuracy and authenticity in historical television. In this post, I will look at Netflix’s The Crown as a case study. This post does not contain spoilers.

There is no one side to history.

There is always a new secret to uncover, a new perspective to analyse, a new piece of evidence to interpret. With the newest season of The Crown now out on Netflix, I began wondering how accurate the show was. I thought I knew everything about the English monarchy, a narcissistic notion based on my library of books, television series’, films and podcasts on Liz the Second and her reign—something I am embarrassed by but not ashamed of.

While playing catch-up with the first season of The Crown, I began listening to the Pioneering Minds podcast by Macquarie University. In Episode 49, the host of the podcast speaks with Associate Professor Tom Hillard, an academic from the University’s Department of Ancient History. The host of the podcasts asks Professor Hillard if we should worry about people learning history from media such as television. Professor Hillard answers yes, saying this is a “huge concern” for historians. However, he also acquiesces that historical television can provide a sense of authenticity to the real-life history on which it is based. As an example, Professor Hillard admits to being a “great fan” of the HBO Rome series.

“I think it catches something of the social fabric underlying the political process of the Roman Republic. I think it does that well. It plays fast and loose with the narrative, as our ancient sources reveal it, because it has to. It cuts corners and decides to roll two or three characters into one for the dramatic purposes”.

But, Professor Hillard does not seem worried about those details.

“I like the overall picture that the HBO producers were going for … At one stage, in one of the commentaries on one of those tapes, they say ‘we’re going for authenticity, not accuracy’ … I know exactly what they were trying to say: they weren’t going to let a concern with accuracy, meaning what they had learned in the ancient sources, get in the road of what they felt was a truer picture.”

In a 2016 blog post by History in The Making called Popular Imagination vs. Historical Reality: What does HBO’s Rome reveal about the practice of history?, the author provides a similar depiction of accuracy and authenticity in HBO’s Rome.

“While historians tend to disseminate history through scholarly literature, directors disseminate historical narratives through film and storytelling. Both may employ different techniques, methodologies, approaches and target different audiences, but their role remains the same: they interpret, revise and produce a selective history that aligns with contemporary imagination.”

Though television producers and historians working on historical television go about their work differently, they both want the same thing: quality content that informs and entertains.

As an ancient history graduate from Macquarie University and a former student of Professor Hillard, I was very intrigued by this episode of Pioneering Minds. I began developing some key ideas about accuracy and authenticity in the historical fiction and non-fiction I was, at the time, consuming. In particular, I thought about the idea of accuracy and authenticity being two different, but equally important, concepts. I wanted to learn what the facts were and how the writers and producers used those facts to direct the series. To use the popular idiom, I fell down the rabbit hole.

At the same time I began my research for this post, I was beginning the second season of The Crown and I came across an interview with Claire Foy and Matt Smith, who play Queen Elizabeth and Prince Philip respectively. In the interview, the two actors lament that the series, though a fictionalised imagining of the thoughts and feelings of Queen Elizabeth in the first decade of her reign, is based in fact. In other words, The Crown might not be accurate, it is authentic.

For the purpose of this blog post, and because I personally enjoy it, I have decided on a definition provided by Theo Van Leeuwen. In 2001, Van Leeuwen wrote: something can be authentic “because it is thought to be true to the essence of something, to a revealed truth, a deeply felt sentiment, or the way these are worded or otherwise expressed.”

To keep the example of The Crown, this series takes real-life events and people from the beginning of the reign of Queen Elizabeth II and uses them in ways that might not be true, per se, but in ways that are true to their real-life character or persona.

Further, the dates of events in the show do not always match up with events as they played out in real life, and words are often placed into the mouths of historical people when there is no evidence to suggest these people said these things (an honoured tradition that extends back to ancient Greece).

While historical events presented in The Crown did occur, keeping to the factual timeline would most likely have resulted in either a) constant time-jumps within the series, or b) a slow-paced television production—both of which can be tedious to an audience. Also, the words scripted for historical personalities n the series are usually true to their character in real life. For example, Prince Philip’s career of insensitive, rude, and often racist gaffes.

Answering these questions, Rejack (2007, p.415-418) says, “Brothers in Arms attempts to use history as a means for sympathetic identification precisely because gaming struggles to achieve such a goal on its own”. Here Rejack is saying that a connection between the game and gamer is developed through a sense of authenticity and without this sense of authenticity evoking sympathy and emotion in an audience, it is difficult for that audience to feel a connection to the game.

The image below was taken from Rejack’s article and encompasses what he means by “sympathetic identification”. This image is a composite image of a gameplay screenshot of Brothers in Arms and WWII period photograph and can be accessed from the game’s Extra Features. In this photograph, you can see how the game combines history and gameplay to produce a sense of authenticity.

Television, like video games, uses a similar mode of “sympathetic identification” to evoke thoughts and feelings and ideas in their audience. Even if, as Rejack suggests, the audience has little or no knowledge of the historical events playing out on their television screens, they become immersed in the world, in the time period, in the people. If even one thing doesn’t feel right to the audience, be it a costume or a building or a word, it can disrupt the audiences’ entire experience of that television series. The authenticity of the piece will be gone.

In researching for this post, I came upon a similar blog post by History Lover’s Delight called Accuracy vs. Authenticity in Historical Film and Television. It was a short piece, posted six years ago in January 2012. In this post, the author says,

“the best series combine the best of both [accuracy and authenticity], to provide us with an emotionally resonant and at least somewhat enriching vision of the past.”

This is a point I agree with wholeheartedly and was one of the many points I hope shines through in my blog post. Something I am hesitant to agree with, however, was the author’s argument that authenticity is “more important and significant” than accuracy.

Gary Edgerton somewhat touches on the audiences’ need for authenticity rather than accuracy in a 2001 paper wherein he discusses parameters and implications of television acting as a type of historian. While this article is now almost two decades old, it still contains points of discussion that are still relevant today. For example, Edgerton (2001, p.8-9) highlights things such as people using television as a source of historical knowledge, the rise of popularity in historical television, and historical people and events being used to explore our present and future world.

Edgerton (2001, p.8) uses scholarly research, such as Hayden White’s Tropics of Discourse: Essays in Cultural Criticism, to explore whether there is “an authentic, knowable history at all beyond the subjectivity of the present.” Or, as I read it, whether any reproduction of history, be it a textbook or a television series, can truly capture the accuracy of that history as it played out in the past.

Edgerton (2001, p.9) says that people, such as television producers and filmmakers, are less committed to accuracy and are more committed to bringing the past back to life “by accentuating those matters that are most relevant and engaging to audiences in the present.” In short, the feeling of authenticity and how it applies to a twenty-first-century audience is just as important—at least in television—than accuracy and fact. 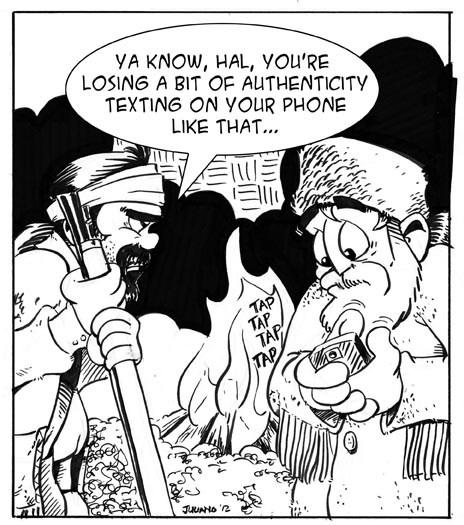 Turning back to The Crown, we see Edgerton’s thesis in the way showrunners depict people, particularly those so focused on tradition and hierarchy, needing to adapt to a rapidly changing society. We see the breaking down of class systems or at least the rise of the working class, and the first “commoner” in about 400 years to marry into the English monarchy. We see the way people navigate a world full of war and conflict, and we see, quite plainly, a woman—the Queen—balancing her work and family life. Although what we are seeing on our screens might not be totally accurate, it does feel authentic and (in many ways) familiar. Andrew Hoskins, in a 2001 peer-reviewed article, said

“The idea is to provide insight into the past: to collect enough of the genuine article that existed at the time of an event for display, or to exhibit some of the artefacts or consequences of a period in history in their many and diverse forms” (p.341).

I believe that this is what The Crown, and other historical television of today, seeks to do.

There is so much more I could say about accuracy and authenticity in historical television but I will finish with a quote from Michael Hirst, writer and creator of the acclaimed Vikings television series.

“I don’t think that as a writer you’re looking for accuracy because you can’t be accurate unless you were there and saw things with your eyes. What you’re looking for is authenticity, plausibility and, if you can get it, close to the truth. When I’m looking to develop a character or storyline I send them to my historical adviser and ask: “Is this plausible? Is it authentic? Are these stories about Ragnar fantasies? Where do they come from? How true do you think they are?” It developed into my saga about Ragnar Lothbrok, which tells the story while building in some myths and legends about him.”

Popular Imagination vs. Historical Reality: What does HBO’s Rome reveal about the practice of history?. (2016). HISTORY IN THE MAKING. Retrieved 12 January 2018, from https://journal.historyitm.org/2016/02/01/popular-imagination-vs-historical-reality-what-does-hbos-rome-reveal-about-the-practice-of-history/